vvvv » Documentation » Learning » Tutorials
» Tutorial Effects - Pixelshader Preparations
This site relies heavily on Javascript. You should enable it if you want the full experience. Learn more.

TOC: Of Effects and Shaders
Next: Manipulating Colors

For all the pixelshader examples we are using the same basic patch setup featuring a 2x2 Grid (EX9.Geometry) and a FileTexture (EX9.Texture) connected to an effect and the renderers View Transform scaled by two so that the grid fills the whole view: 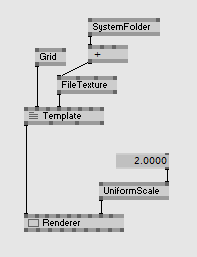 Instead of the Template node in the patch we always clone us a new effect as described on the effects page. Connect your newly cloned effect as shown in the patch and open the CodeEditor via a rightclick on the node. Then take the code below and replace it with the templates code as this one is even more simplified leaving out the vertexshader portions which we don't need for now.

Press CTRL+S to save/compile the code. No errors should show up. If you get an error at this point make sure you really copied everything and your code in the editor looks exactly as pictured above.

Next: Manipulating Colors
TOC: Of Effects and Shaders