vvvv » Documentation » Learning » Tutorials
» Tutorial Effects - Vertexshader Preparations
This site relies heavily on Javascript. You should enable it if you want the full experience. Learn more.

TOC: Of Effects and Shaders
Next: Mr. Wiggle

Vertex shaders operate per vertex of a mesh. A vertex is a container for several data fields. These data fields are available in the vertex shader as the input parameter. The most important are the position, texture coordinates and normals. As a shader writer, you have to know what kind of data is stored per vertex. You can use VertexDeclaration (EX9.Geometry Mesh) to get the vertex description for a mesh.

A mesh container consists of the following data: 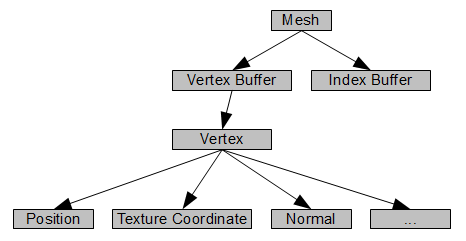 In vvvv a mesh can be split up in it's data like this: 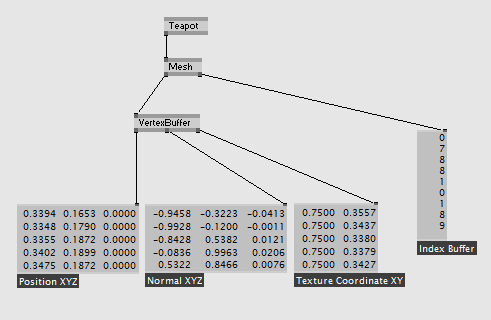 To get the whole picture you have to know how the data is processed in the shader. First, vvvv sends all data of this frame to the graphics card, which is:

The vertex shader transforms the vertex positions into the world space and projects them onto the screen (3d world space -> 2d screen space, see ex9.spaces. Depending on the shader it also prepares some other data which is then used in the pixel shader.
All the data that the vertex shader calculates is packed into a data structure which we call 'vs2ps'. It can have several data fields, which depend on what you need in the pixel shader. It must output the POSITION data field, that the graphics card can calculate which pixels of the screen belong to the mesh. All others are optional, most common is texture coordinates and normals.
The pixel shader takes the vs2ps as input and is called for each pixel of the mesh to calculate the final pixel color. The values in the vs2ps struct get interpolated for pixels which are located between vertices.

Clone the Template (EX9.Effect) on a patch and connect a mesh to it and render it into a Renderer (EX9): 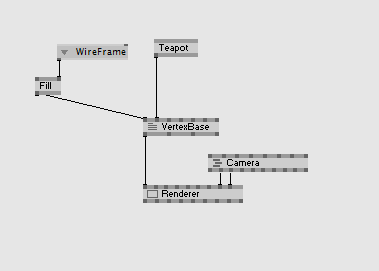 then change the code to the following to get a very simple vertex shader setup:

Next: Mr. Wiggle
TOC: Of Effects and Shaders