vvvv » Blog
» Beta39 Release Candidate
This site relies heavily on Javascript. You should enable it if you want the full experience. Learn more.

It's been a while since the b38.1 release. But finally we're getting ready to release an update to vvvv beta. Here is the release-candidate, meaning it has all we wanted to add for beta39. We only want to give you a chance to test this with your current projects so we have a last chance to squash any new bugs, you may encounter.

Fancy shading with the new PBR effect contributed by flux

Here are the highlights of the upcoming release:

If you're also using VL already, good for you, because here you'll find even more goodies you will benefit from:

Besides those, it is important to understand that with VL you also have access to numerous more libraries that have been released recently. A lot of new packs these days come as nugets. For an overview, see VL packs on nuget.org and you can use them all in vvvv beta, via VL...

So please give this release candidate a spin and be sure to report your findings, preferrably in the forum using the "preview" tag, or also just by posting a comment below.

small bug: the enabled pin of the keyboard (devices window) node has no effect anymore

@tmp thx will be fixed in final release

Finally the current status of VL in beta. thank you guys!

I really like the new installer and that I can choose to install the addonpack.

But as always, more wants more!

How about having an option to install contributions. A bit like vpm built into the installer.
It would be really cool.

very convenient it is, i hope this solves the installation terror in the beginner courses.
thanks for this.

from a professional point of view, there is only one question. we ship our projects with vvvv and all dependencies like packs. that's kinda difficult now since the packs folder is not a part of the vvvv folder anymore. is the intended workflow to add those packs with the root patch ? or would it be possible to have a config file to set the packs folder path ? that would be awesome. maybe even add that to the config.exe to minimize this breaking change.

@microdee, ah ok, thanks for the info, that's cool

Very nice release, i was waiting a lot the pbr integration, i just miss a reflection or enviroment map, to really make it more high end,,, any ideas?

Just a little thing, if I "save as" a patch in a different direction, make a new patch and again "save as", it would be great that vvvv remember that direction.

@AKa-visuals currently we're not planning to add more features to the PBR shader because it will make the useage more complicated. if you want to have all of those features including shadows just use superphysical or so.

Consider adding a checkbox option to add Windows Defender exceptions into the installer - it affects the startup times for me and I know I'm not only one.

@domj good point, upcoming installers (beta and gamma) will add a windows defender exception for the vvvv app folder and vvvv.exe process. thanks for the hint!

I tried to install the new RC6 and it was a powershell error code:2, the same happened with RC5 as well.
Somehow in my system (WIN 10 upgraded pro) was not default set path of the powershell... maybe it's gona happend with others.

@KX thanks for that report. was there anything you could do about it to still install, or it just doesn't work at all?

@joreg the istall was finished, but it was two times code 2 error popup before the final page 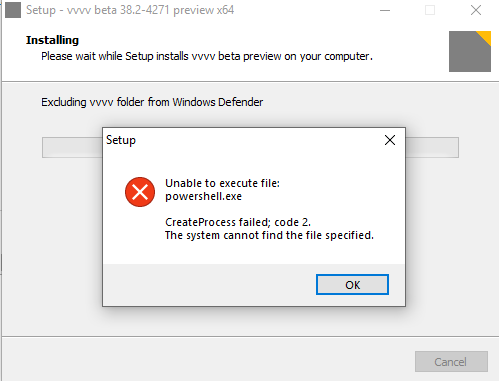 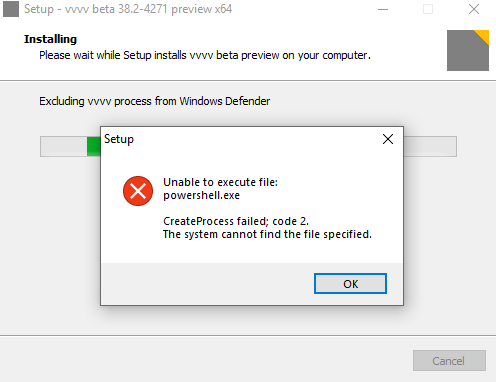 can you please clarify what you mean with "reinstall again withouth path"?

yep, I removed the "C:\Windows\System32\WindowsPowerShell\v1.0\" from system environment variables to get the same error (for the screenshot).
I needed to add this path there, because it was not defaultly set by Windows.

@KX thanks for the detailed report. the installer now looks for the powershell.exe path on it's own. would you be so kind to give RC7 another spin and check whether it works now without having the PATH environment variables set?

@tonfilm it's worked superly fine for me without the path. thanks!

what does this mean?

@velcrome Apparently somewhat after b34 a regression was introduced that when accessing an empty node connection through a plugin it might have caused a division by zero.

afair vvvv always tries to zmod the index with the spread count, so this always failed when the spread count is in fact 0, with an error message as you said ("division by 0").
what's the behaviour now, if the old behaviour has been "fixed"?

or is this even what you meant?

It didn't even get so far. I think it crashed before any plugin code was executed.

Awesome!
Here are my 2cents...

and when i close a patch that have some vl on it, it always says that some vl files are not saved

@parabola thanks for those: