vvvv » Blog
» VL: Input and output pin groups
This site relies heavily on Javascript. You should enable it if you want the full experience. Learn more.

Up until now VL had a rather rudimentary support for pin groups. Only nodes following a certain pattern had the option to have a dynamic amount of input pins. For simple nodes like a plus or a multiply this worked out fine, but for others it either felt like a hack or it was simply impossible to use at all. A node having a dynamic amount of outputs was never supported at all.

This all changes now by introducing proper support for pin groups. So let's jump right into it and have a look at the definition of the very famous Cons node: 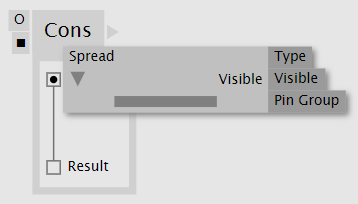 As we can see the pin inspektor is showing one new entry called "Pin Group". This flag has to be enabled obviously. Then we annotate the pin with type Spread. This creates pins with the name "Input", "Input 2", "Input 3" etc. on the node.

If we now look at an application of the Cons node we can already see a couple of nice new features:

Pin groups are not limited to inputs, they also work for outputs which brings us to a new node called Decons - deconstructing a spread into its outputs: 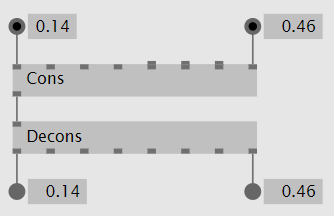 Cons and Decons are examples of using a pin group as a Spread. But there is another variant where the group gets annotated as a Dictionary<string,*>. Instead of addressing the pins by index, they get addressed by their actual name. Let's have a look at two other new nodes again called Cons and Decons but residing in the Dictionary category:

Pins can get added as usual with Ctrl - +, but what's new is that those pins can be renamed in the inspektor UI giving us the ability to quickly build up dictionaries.
The patch of the Cons building up a dictionary compared to the one building up a spread only differs in the type annotation of the input pin.

Apart from Spread and Dictionary the system also supports pin groups of type Array, MutableArray and MutableDictionary. According Cons and Decons nodes can be found when enabling the Advanced view in the node browser.

Creating Pins from within a Patch

So far the pins of a pin group have always been created by the user interface of the patch editor. Things get really interesting though when creating them from within the patch itself:

Imagine the string being an expression of some sort generating inputs for each unbound variable. The possibilities are endless :)

More information on those nodes will be covered in an upcoming blog post. Until then you can try these new pin groups in our latest alpha downloads and happy patching,