vvvv » Blog
» vvvv gamma 2019.1 - preview
This site relies heavily on Javascript. You should enable it if you want the full experience. Learn more.

Only a whopping 6 years and one and an half months after its first mention during Keynode 13 and to the day exactly 5 years after the release of the The Humble Quad Bundle, you can finally hold it in your own hands. Not exactly as the full release we had planned but as a preview: 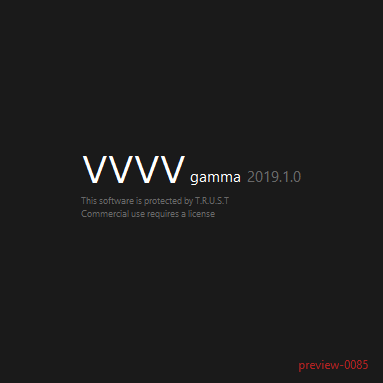 Her majesty... at your service.

To our own surpise we couldn't finish all the things we had planned to release today. Most notably the "windows executable export" didn't make it. We know this is a bummer, but we want to get this right and it just needs some more time.

Apart from that we figured there is no more need at this point, to keep it to ourselves. It is definitely good enough for a preview, definitely good enough to gather some feedback to incorporate into the final 1.0 release for which we take some more time to finish our plans. So let's have a look at what we got:

To accommodate for the fact that from now on we essentially have 2 products, we added two main categories to the forum:

Living together in harmony: beta and gamma

The existing question, feature, bug, general sections were moved into vvvv beta, and the vvvv gamma section got its own question, feature, bug and general sub-sections. Note that by default the search is constrained to the category you're currently viewing. When you're using vl in beta, still feel free to ask questions in the beta forum. We'll handle that.

Head over to this forum section to watch some video tutorials:https://discourse.vvvv.org/c/tutorials

We've previously announced the upcoming pricing model for vvvv gamma, which we're currently refining and we'll update you on changes to it soon.

Until further notice, the previews of vvvv gamma are free of charge but due to its preview-nature we don't recommend using it in commercial scenarios yet.

Apart from the promised and still missing parts, we're aware of quite some little glitches still and will update the download link above periodically. So please check back often and report your findings!

vvvv in the start menu?!

comodo is detecting this

Congratulations and realy excited about it :)

had some time today to try out vvvv gamma. From the first glimpse I really like it so far!

Gosh! So many slick improvements! So many wishes coming true! I want to partyyyy \o/
This really deserves the big version increment, guys. Tough work done! That Was Legitness!