vvvv » Blog
» VL: The big IOBox update
This site relies heavily on Javascript. You should enable it if you want the full experience. Learn more.

one of the more important features for quick prototyping in vvvv always were the IOBoxes. Here is an update that finally brings the vl IOBoxes up to par (and beyond) with what you were used to from vvvv beta.

Most notably missing so far was proper support for spreads. Sorted. When creating an IOBox via "start link -> middleclick" you now always get an interactive IOBox for the supported primitive types: ints, floats, bool, string, path, color, enum, even if they are spreaded or spread-of-spreaded or... 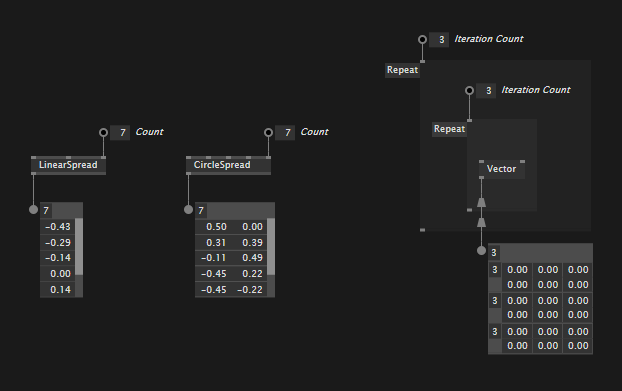 Or configure your own, by first creating a normal IOBox via right doubleclick and then configuring its type (middleclick it) via the Inspektor to a Spread type:

IOBoxes to quickly define values in a patch

Key to spread IOBoxes is that you can directly set their count, without the need to open an inspektor. By default they now show a maximum of 5 entries and add a scrollbar to show more. If you want to see more, you can change the "Maximum Visible Entries" count via the Inspektor.

To quickly modify a constant spread you can also insert/remove slices when the inspektor is active:

Same as with other editors, the spread editors also work on inputs of a node to quickly tweak values:

Editing a spread directly on an input pin

And you can now specify defaults for input pins that are spreads:

Setting the default of a spread input

Mostly useful for numbers and bools, in vl you can override upstream values directly, by manipulating an IOBox that sits in the middle:

IOBoxes do not only pass values through, but can also override them

What we're used to from beta: Entering values via formula now also works:

Vectors now allow you to change all components at once:

Also the Inspektor now shows all properties that you get on a float IOBox, so you can now also configure e.g. a vectors precision.

Paths finally can be reduced to smaller sizes and show proper path ellipsis, ie. preferring to keep the last part of the value visible:

Path ellipsis to the rescue

Click the little O icon to open the current file/directory with their associated program. ALT+click the icon to show the file/directory in the explorer. 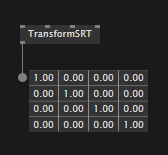 This is it for now.. Available for testing in both latest alphas and gamma previews.

spectacular! really useful. although these are not the UI updates the community were asking for...

this is bigger than meets the eye, thanks so much.

i love them, so much grace and still convenient. i want them in beta -.-