vvvv » Userpages
» ich² pictures
This site relies heavily on Javascript. You should enable it if you want the full experience. Learn more.

there is going to be a video soon but for now the pictures should show many bits and pieces of this project. i'll try to comment each one to give you an insight on what we do here in kiel...hope you don't mind seeing the ppl behind the production as well.

well, this is the stage within the dome. on the right u can see a glimpse of the projection

our messy production space filled with a few workstations and a renderfarm. the space served as film studio, office, master bedroom and so on....we almost lived here for a few months.

shooting HD-Video for the intro scene

tina and lisa (ballet dancers) at the theatre rehearsal space, wearing the wireless body sensor sets from la kitchen / mario (choreographer) is taking a closer look at his girls 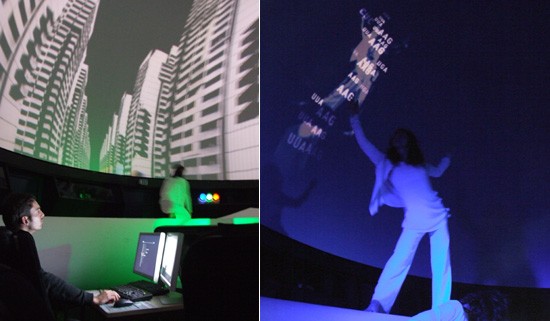 my rehearsal setup, host and interface machine located in the dome / lisa testing the shadow-typo scene

microcosm, water, amobea...this scene is a combination of prerendered video and a reactive mesh deformer

michel's hardcore typo scene, done in vvvv and aftereffects, everything which wasn't intended to be reactive was played as fulldome video like this part

jens did crucial machine/beamer monitoring during the performance. he was hiding underneath the stage / on the right is an early shot of the shadow sequence

host and interface machine running all the dome magic

during the performance my setup was hidden in the catacombs next to the dome. i could monitor every movement via two videoscreens showing infrared front camera, color front cam and zenith cam. surely a strange experience controlling events from this dark place, being totally detached from the performance space

some shots of the server room, you can see the boygroup slave machines, surround audio PC, bridge and sensor machine

this is how vvvv looked in window mode within the dome...pretty crazy ;), right picture shows the final dome mirror live video...the audience was confronted with themselves

above the dome, where we installed another camera for live video and motion sensing

muthesius employees after the premiere: sven (sound editing), me and tom (head of DM/I department) 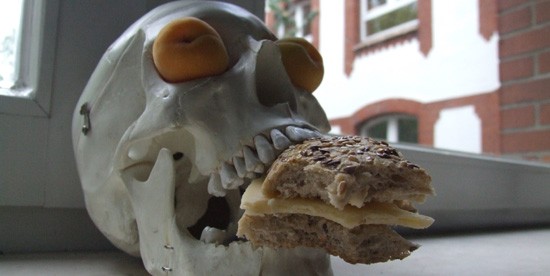 i know, many many pictures...maybe too many but these are already selected out of thousands. digicams can be a pain...