Home » Users » Userlist
» catweasel
This site relies heavily on Javascript. You should enable it if you want the full experience. Learn more. 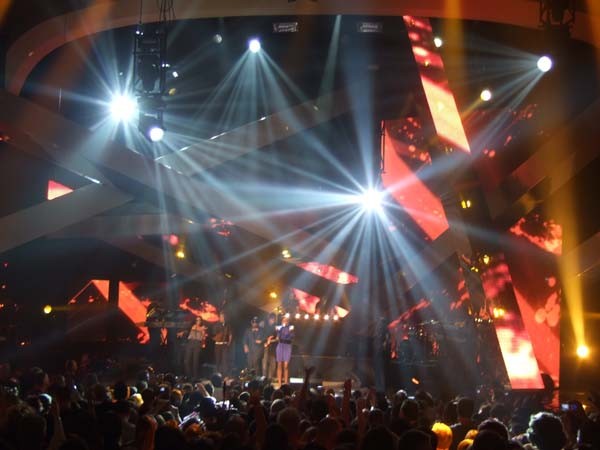 Some vvvv content created for the Vodaphone Live Music Awards, this particular picture shot is from Estelle's American Boy

A picture of the set for this years Xfactor (a uk pop idol TV show), for last years series I had a patch running some versa tubes via artnet, this year all vvvv content is rendered out for use by the 3 hippotizers. VVVV NRT renders account for approx 70% of the custom content for the screens during the show, the rest is from stock libraries.
Excuse the shonky picture, my stills camera is shite! 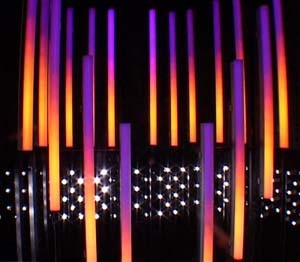 A shot of versa tubes used as the engine controls on a set for HyperdriveB a BBC2 space comedy, the engines are controlled via wireless artnet from MagicQ to a vvvv patch. The patch also pixel maps video to 20 Kolor Kinetics itiles 18 lores, 2 high, unfortunatly they were in a different part of the set when I took this. Hopefully I'll get more pictures when I revisit the set later in the shoot!

Gregsn posted a phase module for spreads, but I needed a random spread that phase shifted in 1 direction so here it is!
RandomSpreadPhase (Spreads).v4p (5.76 Kb)

Only just found this, but it should be very usefull!
you need
Process (Windows).zip (26.86 Kb)
It contains a freeware utility called process that can change the thread a windows app is working on, so you can run 2 copies of vvvv at the same time on different cpus, or vvvv and another program.
I havent tested it yet but I presume udp will work between threads so I'm hoping to offload control of my patches to the other cpu, I'll just loose previews!

This is the finished patch. You need to copy and paste vvvv.exe into its original directory and rename to vvvv2.exe and copy the files from multithread.zip into the vvvv root directory. Run instance1.v4p then click the button, and vvvv2 should load and switch to the other core of your cpu. Communicate between patches with udp. You can test its working by opening task manager and right clicking on the process and opening set affinity.

I saw a tutorial for AfterFx and Particular to simulate a spray can, I thought bet you could do that with vvvv, and guess what???Spray Paint.v4p (28.19 Kb)
Not world shattering, but I was bored, and couldnt be arsed to do the work I should have been ;o)

Heres the first version of a drop down menu, my patches have started getting so complicated I've had problems with interface elements using too much juice, these menus seem quite effecient.
Could be used for Enums or menus. Still work to do, ie make the menu resize when you change the number of menu items, but this is good for a start, give some feedback in the forums if there are any problems.
Menu.rar (629.04 Kb)

Sorry its big, but I've included some bmp files that provide the text in the menus.

The Awkward o Tron is now available in my tiki-index.php?page=catweasel%20-%20KittyLitter
Kitty Litter </a>
And has been updated to work with Beta 10.

Copy Files.zip (87.95 Kb)
Copies files from 1 directory to multiple other directories, rather handy for updating your boygroups etc

Hopefully this is OK, its an updated channel strip for a video mixer, RGB, contrast, level and Luma Key. Its Pixel Shader 2, so you'll need a suitable GFX card....
RGBlumaswitch.zip (4.36 Kb) with lumakey invert

This is very much in beta still, started last november looked at again today! But if you can give it a go and let me know if it works for you that would be great.
You need a Midi Loopback installed, select that output as your midi device, and as your input in your VJ program. Channel 1 and 2 put out midi note on's from 0-127 on ch's 1 and 2 (no off's at the moment) 3- 35 do cc# 1-33 on ch1
Theres seems to be a bit of a delay, I think thats in the midi node, I've noticed that with midi controllers in vvvv.
Its set to run in tray icon mode, currently at 50fps, could probably change that depending on how performance goes, any ideas?
Artnet_to_midi_.v4p (15.74 Kb)