vvvv » Documentation » Learning » Tutorials
» How To Project On 3D Geometry
This site relies heavily on Javascript. You should enable it if you want the full experience. Learn more.

How To Project On 3D Geometry

This article provides a manual approach to solving problems related to the following topics:

Note that due to the manual nature of the described approach your results will not be perfect, but can be quite good depending on your patience.

All the above mentioned topics deal with the same problem: Find the pose (position, orientation) of an object or the pose and lens characteristics (field of view, shift) of a camera viewing that object.

In cinematography with 3d visual effects the terms "match moving" or "camera tracking" are used to describe the problem of matching a real world scene with its virtual counterpart in order to mix them together seamlessly. For this task a list of software exists (boujou, 3d equalizer, ...) that makes the live of visual effects people easier.

For realtime computergraphics the ARToolKit provides a way that works for certain situations (see ARTK+Tracker? for a vvvv implementation) and companies like domeprojection offer projector autocalibration services. But as long as vvvv doesn't have nodes to patch something like this or even this the manual approach for static matching can still help to solve certain problems.

Projection on a flat surface

If your projection target is a flat surface, like a wall and your projector is at an arbitraty position, not exactly facing the part of the wall you want to project to, the projected image looks distorted. Using Homography (Transform 2d) you can easily pre-distort the image you project so that it appears undistorted on the surface.

Note: Like this you can always get a correctly looking projected image on a flat surface independent of the projectors position, orientation to the surface and its lens characteristics.

Projection on an arbitrary surface

When projecting onto an arbitratry 3d surface, no matter how the projector is positioned and oriented towards the surface the resulting image will mostly look distorted. Note though that there is one point from which the projected image looks perfectly aligned, that is: the position of the projector.

Having seen the above you should now understand that the key to a correctly undistorted projection is the following:

A projection onto an arbitrary surface looks undistorted (ie. exactly as being projected) when seen from the point of view of the projector.

Note that this works perfectly only in theory, as chances are that your virtual scenes parameters will never exactly match your real world parameters, as some of them, like the projectors orientation, are hard to measure precisely. But never mind, there begins the manual tweaking of those parameters and with some patience and practice you'll get quite good results.

Virtual replica of the real scene

At this point you have a basic setup where the virtual scene matches the real world. Take your time to fiddle with the parameters of the Projector (EX9) module or slightly adapt your mesh using the PointEditor (3D Persistent) module until you are satisfied with the overlapping of your virtual and real world scene.

Flat textures aligned to the surface

With this basic setup it is now simple to achieve an effect like in dotdotdot's Valcucine’s skyscraper project. Here it is the goal to project images in a way that they feel like a property of the target surface, ie. like they where a texture of the object. The textures should look exactly the same, from whatever position you view the surface/sculpture and certainly independent of the projectors position. 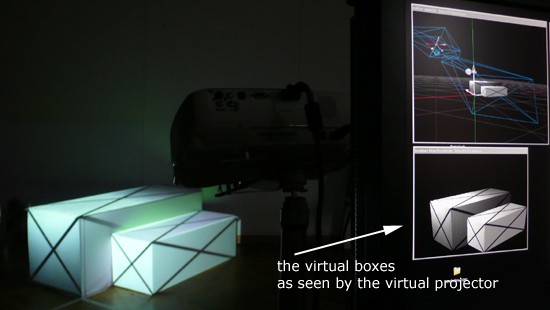 By rendering the 3d model from the same viewpoint and using the same lens-characteristics as the real projector has for the virtual camera, the resulting image will perfectly fit the projected surface. Any flat textures you give the 3d model (in the above example a simple black cross on white) will look undistorted on the real surface and therefore look and behave naturally like flat textures that look the same independent of the spectators point of view.

Any shading (including lighting and shadowing) you apply to the virtual model is a surface oriented effect and as such behaves like a flat texture on the model. Effects like seen in our own Lightstrive and Pablo Valbuena's Augmented Sculpture Series can be realized just like this.

Fake 3d effects like seen in Pablo Valbuena's The Hague City Hall projection, AntiVJs Nuit Blanche Bruxelles projection and some of easyweb's projections contain an additional quirk you should be aware of.

While with the above setup those effects are quite easy to achieve, by simply adding 3d extensions to your virtual model, for a spectator they really only work from the one point in real world that corresponds to the virtual cameras position. Like this simple example shows, when viewed from about the projectors perspective the text seems to be extruded from the little box. When viewing the same projection from a completely different point, the illusion is gone.

But never mind, in many cases this isn't a big deal as our TV/cinema trained eyes and brains are quite tolerant with such visual challenges as long as our viewing position isn't too far off the actual position. Also compare John Beever's Pavement Drawings.

In those situations you need 2 render-passes:

Projecting on two sides of a house with one perspective

In this setup the idea was to project (among others) 3d-illusion effects onto the facade of the FH Schwäbisch Gmünd.

Knowing that those effects only work from one perspective a spectators view was chosen from which both sides of the facade can be seen. That is in the middle of the two real projectors to be used.

Here is a patch that demonstrates the basic setup:
ProjectionMapping_2ProjectorSetup.zip (12.11 Kb)]

The above picture demonstrates that the 3d-illusion only works from the specified virtual camera/spectator position. For more results of the 5 days workshop in Schwäbisch Gmünd see here.

In a 360° projection the virtual cameras all need to be placed in the same position, with only different rotations. While this is possible in a virtual scene you cannot put several physical projectors at exactly the same place in the real world.