vvvv » Contributions
» Svvvvitcher
This site relies heavily on Javascript. You should enable it if you want the full experience. Learn more. 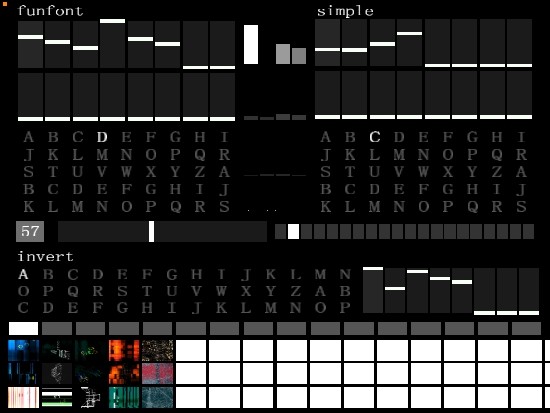 after three attempts to make a nice vj tool, i came to the conclusion, that the most powerful thing is to switch patches. because a patch can do just anything, it can contain videos, pictures, 3d models, generative stuff etc.. and... there are just thousands around. every vvvv patcher has lots of try outs, small ideas and whatever on his harddrive. wouldn't it just nice to drop them all into a folder and mix them on a vj set? sure it is!

when makeing a patch audio reactive, you would usually use some audio analysis nodes, connecte them to some pins in your patch and add a few controllers for realtime modifications. and this is what svvvvitcher simply does, it provides a framework around your patches with audio analysis values and realtime controllers.

the only thing you have to do to add a patch to the svvvvitcher, is adding 5 IOBoxes, 3 inputs and two outputs:

then of course, you have to connect the IOboxes in your patch and add a DX9Texture (EX9.Texture) node to render the output texture. After this you need to give the modified patch a name starting with "_root_" (this is necessary, to allow patches to load subpatches) and drop it sowmwhere into the 'Patches' folder of the Svvvvitcher. the svvvvitcher scans this folder for patches with that naming.

a disadvantage is that vvvv has a short freeze when patches are switched, depending on the size of the patch. but in a vj set of many hours.. who really cares?

in order to run svvvvitcher you need to have the addonpack and .NET 2.0 installed, as stated at the downloads page.

a forum thread for svvvvitcher is here.

My Switcher window don't work .. She is not like the picture

do you have the addonpack installed?

Yes but I've downloaded the latest version of VVVV and now it work. Thanks

Thanks a lot, Is fantastic, works very well in the pc (i3 1gb radeon) with nanoKorg and using a web cam. But when connecting the projector the mouse "jumps" with some patches and it is impossible to handle: the frames down to 4 ... I tried it on several laptops, the latter is i7 NVIDIA GeForce GT 630M.
Any solutions? Graphics card may not be enough?
(Forgive my English, google translator is not god)
No problem for new patches or effects, no problem with nanoKOrg (mapped with the midi learn)

@selavivivi: svvvvitcher is quite old but its concept is the foundation of newer patchswitchers/mixers like iris-interactive-realtime-image-synthesizer or md.vis . even both of them are active projcts they are constantly improving by time. check them out. also IRIS will get a touchDesigner-esque interface soon so you're not limited by channels and effect slots