vvvv » Blog
» vvvv - The Tool
This site relies heavily on Javascript. You should enable it if you want the full experience. Learn more.

I'd like to give you an update on the toolkit front, that vvvv has always been. While vvvv beta can be described as a dynamic system, mutating while you mold your patches, vvvv gamma and its workhorse VL are of a different kind. With VL we embraced features like

In short, we embraced robust software developing strategies that at first seem to contradict the idea of a playful development toolkit that allows you to mold your app. We went for compiled patches, running, and hot-swapping them while you are building them.

But we envisioned vvvv to be both

While my last blog post was about the language, let's focus on the toolkit this time.

Let's have a look at some features that allow you to interact with the VL runtime, the system that runs your patch while it allows you to edit it. The features here empower you to enrich the patching experience. We understand that these improvements need to "trickle up" into the libraries and only thereafter will have an effect for all users.

So the following is probably mostly interesting for advanced user and library developers.

Tracking Selection within the Patch Editor

You now can react to a selection within the patch editor. The more libraries do this the more playful the environment gets. We still have to figure out all the use cases, but here is a list of what's possible already

And there is more:
You can get a Live Element for a certain Pin or Pad.

useful for the cases where you want to always inspect a specific pin or pad of some patch. This can be helpful for debugging.

Let the Patch Editor navigate to a Patch

When a Skia Renderer is your active window, Ctrl-^ let's you jump to the patch in which it is used. This is handy when you opened a bunch of help patches and you want to see the help patch that is responsible for the output.

You can use the node ShowPatchOfNode to do the same trick.

Tooltips for your own data type

Here you can see a custom tooltip for a user patched type "Person".

You now can patch your own tooltip with RegisterViewer. This way the patching experience will be so much more fun. We're in the process of adding more and more viewers for our types.

Up to now, we had

And now we introduce to you:

You can try it yourself by using the Warn or the Warn (Reactive) node. 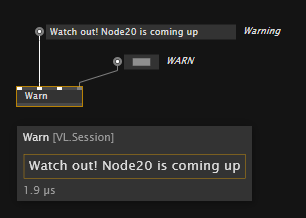 The warning will not only show up on the Warn node, but also on the applications of your patch.

Sometimes it's just convenient to be able to send data from one patch to another without the need of feeding the data via pins. We now have send and receive nodes, like known from beta.
Features:

Some libraries focus on a simple idea:
Let the user build an object graph that describes what he wants in a declarative manner and the library will do the hard work to follow that description.

Examples for this approach are

VL.Stride and VL.Elementa have in common that they focus on a very certain type of object graph: A tree made out of entities and components.
Libraries like these can now talk to the user and enforce the user to not build any kind of graph, but a tree-shaped graph (where one child doesn't have many parents).

You'll very soon be able to inspect those patches.

Help patches to all those topics will show up in the CoreLib API section (at the bottom of the listing).

We hope you'll enjoy these ways of integrating with the development env.
Thank you and we'll see you soon!

is there a helppatch regarding S+R ?

@u7angel here is a screenshot of a simple float sender. but you can send anything and use anything as a key. basically like in a dictionary: 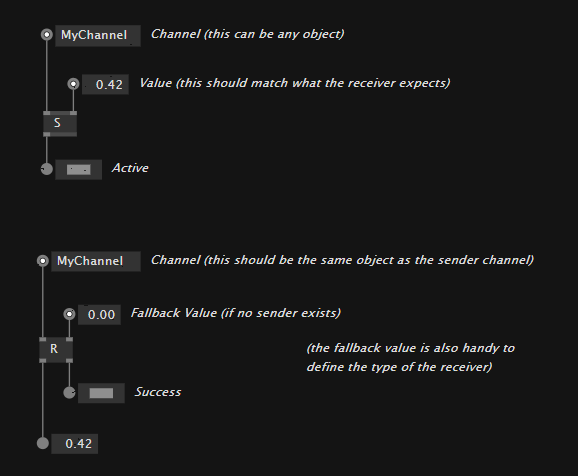 schlonzo: use different filenames :P counter is your friend

christosk: How do I record a sequence of images without having them overwriting one another? I