vvvv » Blog
» vvvv meets Xenko
This site relies heavily on Javascript. You should enable it if you want the full experience. Learn more. 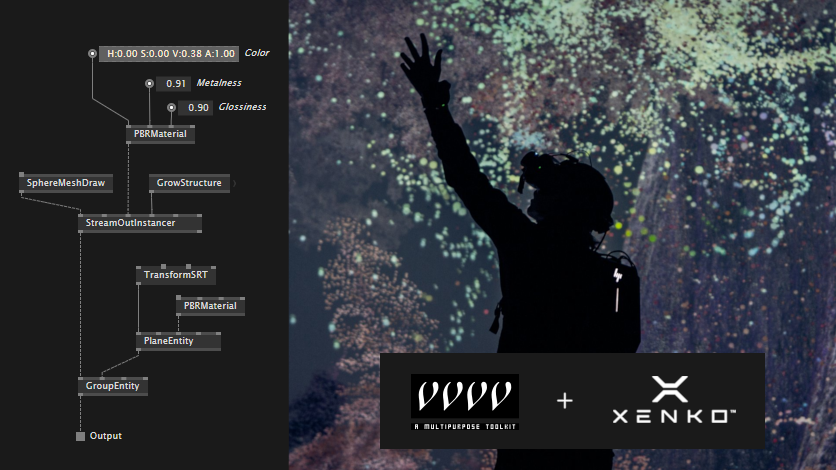 As a small developer studio with a focus on disrupting the world of visualprogramming, it became apparent to us that we cannot at the same time join the battle of 3d engines. Still, a strong 3d engine needs to be at the core of vvvv so it can serve in the main usecases we know for vvvv today. Therefore we've been on the lookout for an existing engine that we can adapt to the needs of vvvvs users.

Enter Xenko: In August 2018, the Japanese developer of game engines and 3d middleware Silicon Studio, decided to opensource the 3d-engine Xenko, they'd been working on for ~10 years. The elegance of the existing codebase and the fact that it is completely .NET based, allowed us to quickly assess that it will be possible for us to integrate it as a library for VL and gain from those 10 years of professional development.

Forward to today: Xenko's main developer Virgile Bello (Xen2), who took on the challenge to run Xenko as an opensource project has moved to Berlin. He now has a seat in our office and we're happy to support Xenko in all ways we can. For vvvv it is in the greatest interest to see Xenko develop as a strong, independent game engine. Because every improvement that goes into Xenko, will soon be enjoyable for every user of vvvv gamma.

And you can support Xenko too: Join their community and/or patreon, read their blogpost of the same announcement and generally spread the word about them. Everything counts!

oh wow, congratulations to all of you!

vux: Hey all, we now in Berlin with @idwyr, say if you want to catch up :)

joreg: @mediadog got it thanks!

joreg: @mediadog pls tell us where you found the broken link so we can fix it..
read more
follow on twitter