vvvv » Blog
» vvvv_50beta38
This site relies heavily on Javascript. You should enable it if you want the full experience. Learn more.

Another release just out of the gray only 2.5 months after the previous. How come?

The last beta37 release proofed to be quite stable, hardly any too concerning bug reports, but we have a breaking change to introduce and think this is a good moment. Hear us out:

If you're a vvvv-only user, you're safe. This release only has minor changes compared to beta37, so there shouldn't be any reason for you not to upgrade. Horray!

If you're also using VL, we're afraid, but swallow this:

.vl documents saved with beta38 are not backwards compatible with beta37!

Since there are hardly any other changes, we recommend you also switch as soon as possible and never look back...

So why the breaking change?

It's about how values get stored in IO boxes and pins. They now use the same serialization technique we already introduced as a node set for beta37. This means that we can store any data inside patches for which a serializer is registered - be it a spread of values, a dictionary or even a custom record: 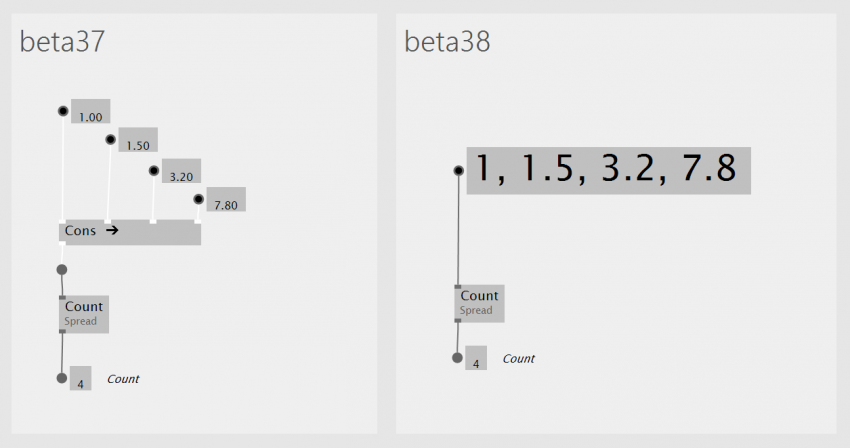 And as a second example a dictionary from string to value 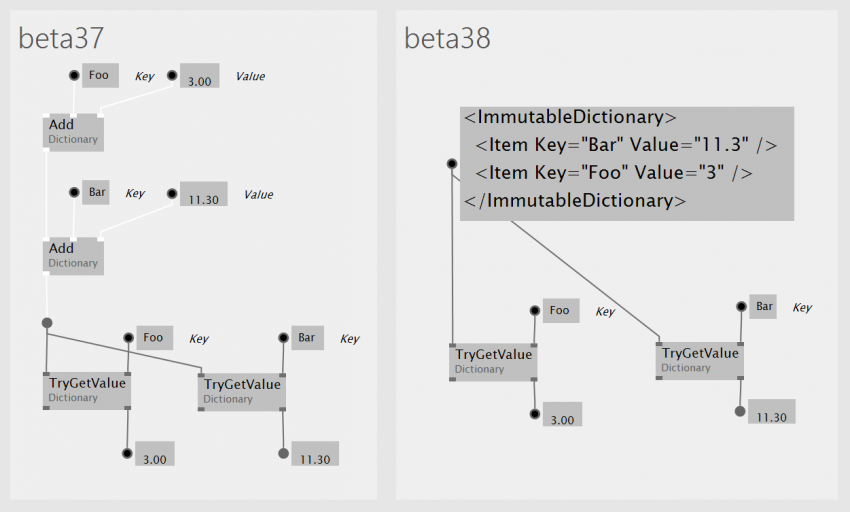 It might not look as much yet but it is a first step to get proper IO boxes back.

All other changes can be found the as usual in the Changelog.

cool for the auto-init/split and all, also looking forward for the progress you've made with xenko.

but the backwards-incompatibility is a shame. especially because I don't get why going from "single-value" to "single-value-or-many-values-or-xml" would stop parsing the old version.

I hope you find a way to mitigate that, maybe provide a converter of some sort. Not being able to upgrade any vl project is a slam in the face.

tonfilm 23/11/2018 - 04:20
velcrome said
but the backwards-incompatibility is a shame. especially because I don't get why going from "single-value" to "single-value-or-many-values-or-xml" would stop parsing the old version.

I hope you find a way to mitigate that, maybe provide a converter of some sort. Not being able to upgrade any vl project is a slam in the face.

@velcrome it sounds like you think you cannot open your old projects with beta38, but its the other way around: if you save a vl document with the new beta38 you cannot read it anymore with beta37, so all older vl documents open just fine with beta38 and since there is almost no other change it should be a no brainer.

ok, so only as usual. must have misread that, never mind then.

no! usually there are no breaking changes from one release to the next. ie. usually you can open documents saved with a new version still with an older version. we take a lot of care to not cause such troubles. in the rare cases it happens, we are extra explicit about it (like above) so everyone knows and can prepare. hope this clarifies.

ravazquez: I did not know you were making plates as well: http://www.clairewan.com/

joreg: Tomorrow Thrs, Feb 12: #vvvv Patching Circle: We're there to help! https://gettogether.community/events/3965/vvvv-berlin-patching-circle-5/ No excuses, it's free and there are drinks!