vvvv » Blog
» vvvv at DotNextConf Moscow - Video
This site relies heavily on Javascript. You should enable it if you want the full experience. Learn more.

as mentioned previously, elias and me were at DotNextConf in early November where we talked vvvv to a whole different audience than you are. We titled our presentation "vvvv - Visualprogramming for .NET" hoping to get the benefits of what you all take for granted (that is "live, visual programming") across to people who are still stuck with an EDIT/COMPILE/RUN mode of development. And to hear if they could see some application of it in their fields.

The general feedback can be summed up as "Huh, this looks interesting, but I don't know what to do with it". Clearly our demonstrated use-cases didn't resonate with them. A few people came up to us after the talk and were interested in details about the state hot-reload and one guy told us he is working in aero-space engineering and he believes they could very well use it: When working together with physicists they often need to exchange code with them but they always deliver very bad code, he claimed. He saw vvvv as a perfect fit of a tool they could prepare some high-level nodes in, so that the physicists have a tool to experiment with, where they cannot make too many mistakes... Interesting take and in a sense exactly what we were hoping for. So let's see where this goes...

Now grab a drink and some snacks, this goes for 50 minutes:Watch on Youtube 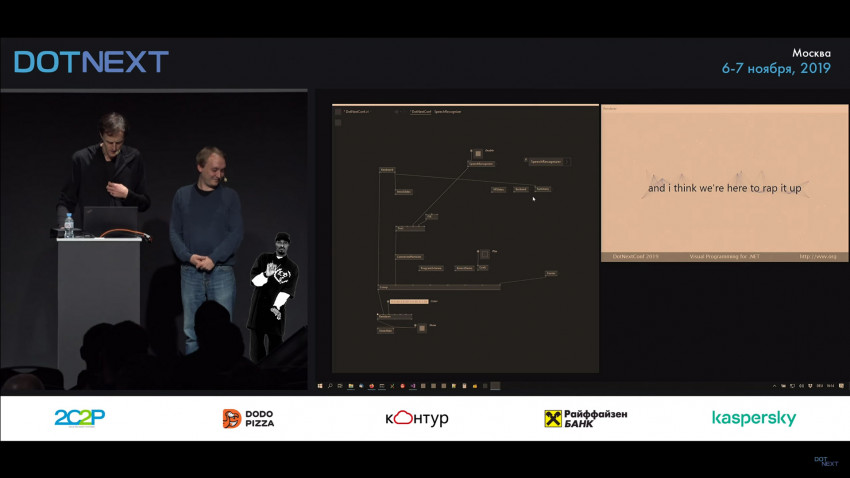 Great talk! Kudos to you and Elias. Nice to hear a bit on the internal workings, now I can see why I'm having issues with code reloads (lots of indirections) and my memory going through the roof after some editing (large assemblies not being unloaded). Guess splitting stuff up will help with that.