vvvv » Blog
» VL: XML and JSON nodes
This site relies heavily on Javascript. You should enable it if you want the full experience. Learn more.

one of the more basic things any programming library has to support is parsing and the creation of XML data-structures. since vl is based on .net we don't have to invent anything here but can make direct use of .nets XDocuments, XElements, XAttributes datatypes. so we're happy to announce that in cooperation with dominikKoller we added xml/json support for vl: 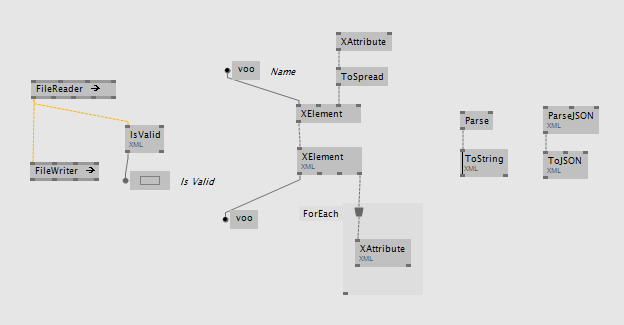 so basically anything you could already do in vvvv plus some more. and this is only what we brought to the surface for you. using the underlying .net datatypes (XDocuments, ...) directly, a pro-user will (later) easily be able to use the whole range of functions that those datatypes provide for more advanced use-cases.

so, once again, something for the whole family..available in latest alphas now.
gut patch!