vvvv » Contributions
» vvvv-Patchbox
This site relies heavily on Javascript. You should enable it if you want the full experience. Learn more.

This toolset gives you some additional capabilities to patch with great speed.

Yes, thats right: it improves your thought-to-patch-ratio by over 9000!

Download, place somewhere on disk (e.g. the girlpower folder of your vvvv). Drag'n'Drop into your root.v4p (can be opened with Alt+R while running vvvv) and save.

Retrieve the contents from a patch (e.g. mainloop.v4p) and paste it at the mouse position by typing:

Other prefab patchlets are in the /Patchlet folder, like tty or render9
Add your own.

Hold down the right mouse button while resizing an IOBox to fit the font size accordingly.

While scaling or moving an IOBox you can use the mouse wheel to add rows and columns to the iobox.

While scaling or moving an IOBox (Value Advanced) you can hit i, b or f to change the Value Type (Integer, Boolean or Real aka Float)

Hold Alt+Space to hide your current patch window. Releasing the shortcut will force the window to redraw, so you can simply make any gui glitch disappear.

Use Alt+Left/Right to move your current patch window in a similar manner as you are used from other windows with the Win+Left/Right shortcuts. The code to do so is modularized, you can make your own layout just as easily.

Hold down Space while moving/resizing nodes or ioboxes to make them snap to an invisible grid.

While the original patches of many contributors were quite diverse in their approach (plugins, regex, in-string-replacements and whatnot) I took the liberty of homogenizing them towards XElement/XPath usage and modularizing them, so they can be combined and extended more easily. I hope some of the mechanics can make VL a better GUI.

More helpers can be integrated (like project statistics, an exporter, a in-patch git prompt or whatever you come up with) to increase project productivity. Choose active Improvements as you wish, there is no harm in disabling some.

Feel free to clone and pullrequest your feature into the code.

Downloaders and potential users, don't let yourself be fooled by the following thread. This contrib will continue to strive to be safe to use. Discussion will occur about details, which is in your favour because code quality will increase eventually.

To the devvvvs and listening devs:

While coding this, I found some things that are unclear to me.

nice one! it will be superuseful. I found a problem though that every comment starting with 'i' will be treated as an I node. I fixed it with changing to capital "I" and making regex and sift case sensitive also the searching pattern more strict. So currently a comment like "identification" will be converted to an I node or "+blabla" will be converted to + node. i suggest using this pattern

which allows one space, one dash and at least one or more numbers broken into half with , or . only once. If anything follows after this it won't match so "I -44.56.345" won't match

have a look at ioscaler, maybe you want to include it.

and here is a half working snap-nodes-to-grid.
not really fun to use so far.

i also made a gui redrawer, but yours seems simpler.

cool idea to make this modular.

i think i'll settle for

edit: I expanded this to allow presetting up to four Values (so you can preset any 2d, 3d or 4d vector). Simply separate by comma or space.
Also note that those are now symbols, so you can add any keyword as a placeholder if you want to have more nodes at your fingertips.

i wonder, if we should have a special prefix to be able to call patch macros like that. i.e. column " : " could be a nice way to distinguish inline "Node Browser" or an intended comment from the much different ":make shit" aka The Mighty Inline Command-prompt to trigger a certain generator patch.

I added your patches after some cleanup. Selecting multiple nodes is now perfectly possible.

makes sense to just leave the mouse node away.

OK, i have now fiddled with this stuff for a week and added almost everything that we've been missing.
There are a bunch of nice modules now that might help you to make even cooler additions to the GUI.

Iirc the Patchlet Manager was an idea sketch of @Kalle waaay back, and it finally arrived to vvvv. It uses the hack from @sagashi, that a fresh comment can be interpreted as some kind of command prompt.
Simply doubleclick and type:

and hit enter, Patchbox will automatically load and insert the contents of the patchlet render9.v4p

Also the possibilities to preconfigure an IOBox without Herr Inspektor are now quite compelling: font size, row- and column-count, and Value Type can be configured directly, with mouse + Alt and simple keystrokes. See help patches of IOScaler and IOType for details.

There seems to have been a change in the Zip nodes, the 34.x are much more forgiving with null-elements and nil.
Anyway, I made it work in both versions. Have fun.

This modules/Patchlet needs to be included in the next beta of VVVV.

confirmed. there was a link missing. bugfix is on github

thank you! if possible, could you please add the ability to hide a patch window by right clicking its title bar?

Nice!
But guys mind it takes some CPU, of course. For example frames drop from 28 to 24, could be problem on stage. Maybe something likehttp://upload.martinzrcek.cz/Patchbox (VVVV).v4p to enable only when potentially used?
and a tip: Toggle Bang Press instead of Boolean?

So Usefull this tool, Thanks guys!!!!

Yes, indeed some welcome shortcuts.
Due to its runtime footprint it seems worth some optimisation. Quite some of it i'd even wish to be native.

Unfortunately, one thing makes it unusable for me: Some errors spam my TTY when i resize a node:

I tried to track it down, but it seems to be deep in XPath, right?

Yes, that's from xpath. I think there is a schema or something missing, not entirely sure. Does checking Resolve Externals help?

Really cool tool, wish I came across this earlier. Commander is nice but a bit buggy - too easy to end up with a tiny window, for example if you just tap space, thats your window gone. Or if you let go Alt before Space same thing. This should be more reliable, ie. if you have pressed down Alt and Space together it should revert if you let either of them go (problem is the AND node).

Quick fix for Hide(VVVV).v4p. Now it brings back the window even if you let go of Alt before Space or just tap Space quickly: 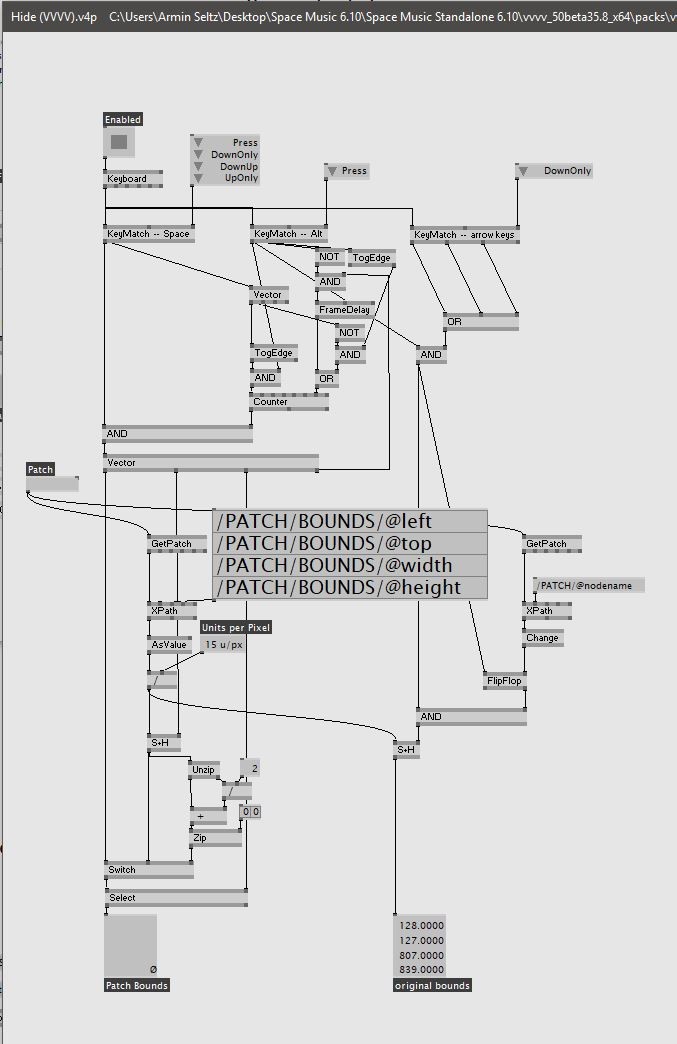 Also would be nice to have a S+H(Patch) node, so it doesn't resize the wrong window if you click on it while holding Alt+Space.
https://www.dropbox.com/s/dzhrbvc0mpk5y57/Hide%20%28VVVV%29.v4p?dl=0

Also in IOMagic.v4p there is a connection missing, which prevents being able to create anything other than IOBox (Value Advanced). This is the missing connection:

I am traveling till February, so feel free to upload a new version with your fixes.

If you want, you can also PR my GitHub repo.

Could this end up in the addonpack? I am reluctant to use it since I work on multiple installations and would like to have to do as little as possible when making a new vvvv install.

i'd be okay with that (as is the license, anyway), so you just need to convince the addonpack maintainers

thanks seltzdesign for the fix of the Hide module and the reminder to publish a current version.

karistouf: i m searching for a solution on a cylinder end and 3 Hittest... tx https://discourse.vvvv.org/t/hitest-on-a-cylinder-end-in-3d/20725
read more
follow on twitter