vvvv » Contributions
» Struct
This site relies heavily on Javascript. You should enable it if you want the full experience. Learn more.

pack
Credits: readme and bjoern for years of using and feedbacking 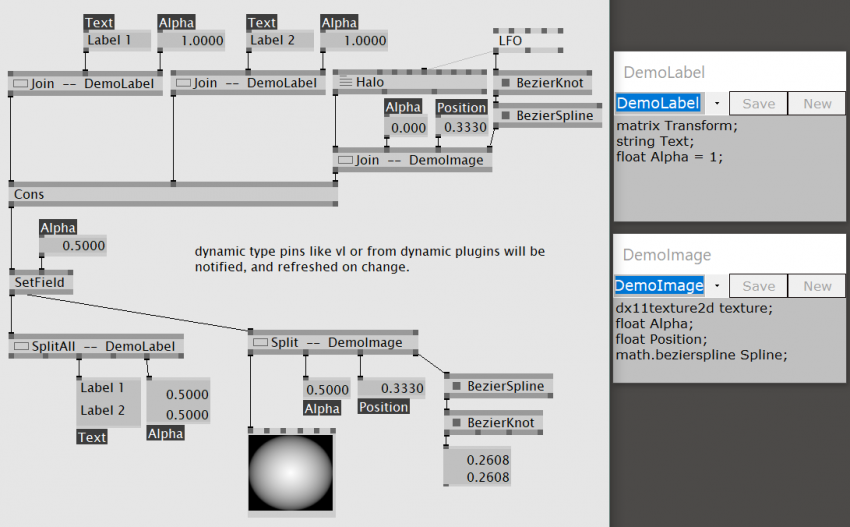 keeping your patches structured, fast and tidy
or
taming the link-spaghetti and S+R chaos

bundle links/pins into named groups (think Cons with multiple types married with s/r) while not giving up visual dataflow, performance and vvvvs graph evaluation strategy (only evaluate what is requested from downstream.

vvvv got increasingly diverse, plugins, dynamic plugins, shaders, dx11, vl,... projects grew in complexity and size as well. while we all love vvvvs capabilities for quick prototyping by patching, bigger projects are acompanied by the struggle of well structured (speak heavily nested subpatches; splitting of logic, io, animation,...) which make it harde to quickly implement some extra since it ends up in creating loads of outputs and inputs everytime (and probably creating a nice git merge conflict when not working alone). or one starts to insert Send and Receives all over the place, to keep the changes local only, making it a mess to understand and debug for someone else later and reduces reusability of single components.

struct encourages patching in components/datatypes: e.g. a GUI element has the name 'Button' and needs a transformation, text, dx11 background image, and a vl delegate (action). the rendering part uses a split, the logic part somewhere else the join. inbetween just one link. when a new property is required while working on either end, just define a new pin, the other end (or any struct node using 'Button') gets it automatically.

free for non-commercial and educational use
commercial usage requires licensing - get in touch, play fair and support
(license ranges from a note of appreciation for indy use, to fair share for industrial scale)

25 downloads? This is a hidden gem, you people should go check it out. Or else I hope I won't ever have to debug your patches ... :)

greate piece of software. I love it. Was always using to old github version. Nice improvments.

Wow, this looks like a serious improvement to VVVV! Am just starting to check it out, curious to give more feedback once I dive deeper into it.