vvvv » Contributions
» Gea.NaiveGPU
This site relies heavily on Javascript. You should enable it if you want the full experience. Learn more. 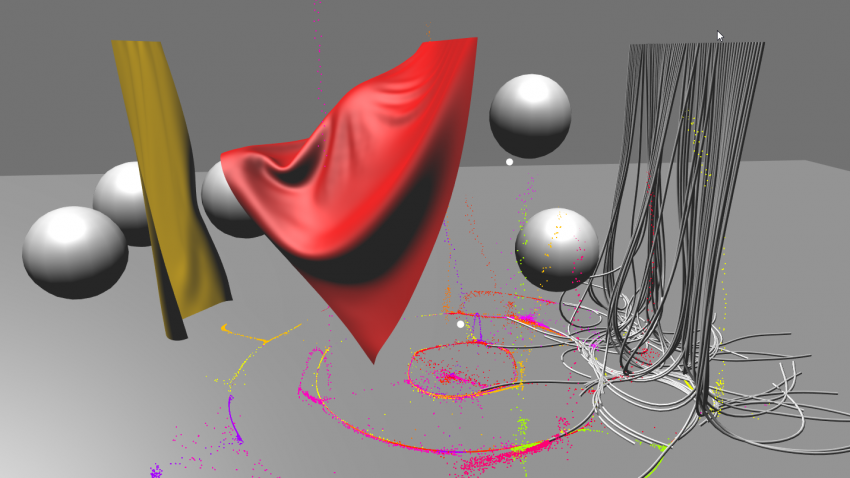 Naive physics simulation on GPU.
Rope and Cloth physics based on a simple Springs algorithm, verlet integration based.
An Euler GPU particles system can be managed within the same architecture
Particles, ropes and clothes can be created and managed separately.
Each entity of the system is called "group" (due to the fact that is a group of threads on the unique GPU buffer that holds all the data) (I know, I would call it differently now, but...).
You can apply forces, constraints and deformers to individual groups or to all of them together.

This is a software prototype born one year ago, built in crazy hurry for a project and full of compromizes and probably unfinished parts.
On one end I feel bit unconfortable in releasing it since nowadays I would sctructure it quite differently. It looks so imperfect to me...
..but on the other ends it contains some principles that might be interesting for other users. This is why i decided to publish it, in it's unperfect state, just adding some comments to the patches hoping it gets a bit more understandable. you can always ask me on the forum...
Ah, I didn't have really time to prepare nice help patches or multiple example scenarios. I just have one example patch in which you see most of the stuff at work...

If you would like to contribute to the development of the pack (adding help patches, modules,...) you can find it here:https://github.com/vvvv-dottore/VVVV.Gea.NaiveGPU

Awesome contrib, alredy put it to use in one artwork!
I have a question thou,
would it be possible to construct double sided geometry?
Was trying few things but with no luck so far.

Stix
do you mean having a nice shading on both sides of the cloth?
that's not related to the simulation itself, it's the PS of the shader render the cloth that has to deal with that, flipping the normals when the triangle is facing opposite the view.

Awesome contribution!
Is there a way to read back when a collision between an obstacle and a geometry happens?

Wonderful!! Thank you for this contribution!
Is it possible to change the obstacles from spheres to a custom 3D model?

Hey wisp , happy to know you like it.
unfortunately only sphere obstacles are implemented.

where do the obstacles get transformed ?