vvvv » Documentation » Devvvveloping
» Test Framework
This site relies heavily on Javascript. You should enable it if you want the full experience. Learn more.

In order to prevent certain bugs from resurfacing again after they've been fixed, vvvv has a test framework. The framework consists of a couple of nodes and a simple template that test-patches have to follow to test for a specific known bug. If the bug persists, the patch returns an error-, otherwise a success-code.

Everytime the vvvv build-server creates a new alpha-vvvversion it also runs all available test-patches. If any of the test-patches fails, the build is not being released and the devvvvs are being informed about the problem.

Therefore the more test-patches we collect about known issues the less likely it is that our build-server lets a buggy build slip through. Here is how you can help us to improve the release-quality of vvvv by creating and sending us test-patches for issues you find:

To be recognized as a test-patch by the build-server a patch needs to: 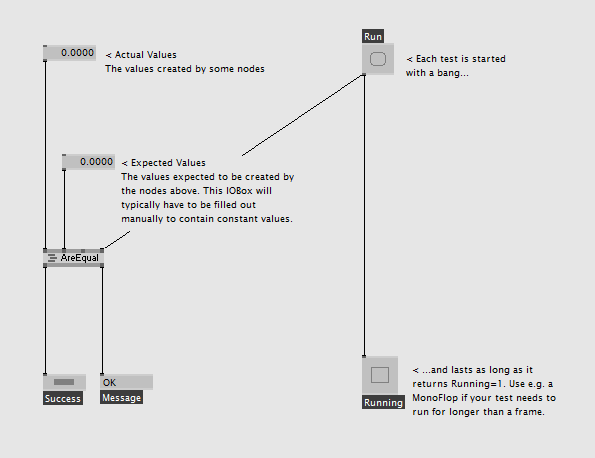 The test-framework will open every such patch and bang its Run input. Now the creator of the patch is responsible to test for a specific case and return a Success of 1 (for true) or 0 (for false). Additionally a Message can be returned. Typically it is enough to run tests for exactly one frame only and the Run input can be directly connected to the Running output. But it is also fine to have tests running for a couple of frames by setting Running back to 0 after some frames past.

The Test category in the nodebrowser holds a couple of nodes that can be useful for building test-patches, like:

Consult their help-patches to learn how to use them.

and enter the directory that holds your test-patches into the Directory IOBox, then press Run Tests.

This is the same patch our build-server runs, so the TTY output is a bit cryptic but you should be able to identify problems there.