vvvv » Contributions
» Notuiv
This site relies heavily on Javascript. You should enable it if you want the full experience. Learn more. 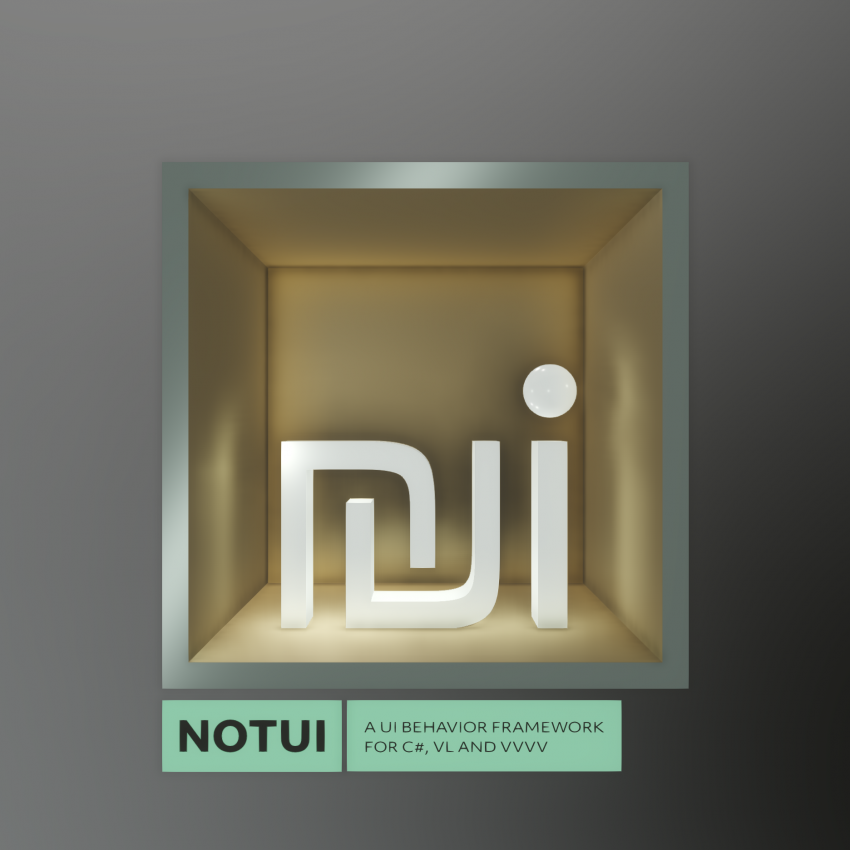 Notui is a UI behavior package written entirely in C# providing a robust skeleton for your UI elements. The intention here was to keep VVVV's vast drawing capabilities while eliminating the cobweb of doom usually present while patching UI logic. The result is a mostly dataflow friendly system which separates structure, stateful-logic and rendering. Note also that Notui is a C# library first and Notuiv is its VVVV implementation. This again means all the features of Notui theoretically can be accessed in VL and simply fetched from Nuget.org. This also means that you can patch your own element types and behavior delegates in VL. This is untested yet though.

tl;dr, get it with vpm

But get vpm first
if you hate vpm though you have github releases: https://github.com/meso-unimpressed/Notuiv/releases :P

And also it doesn't depend on either mp.essentials nor mp.dx. Yay I guess :P
But it requires vvvv beta36+ and vux's DX11 1.1+ but 1.2+ is recommended from github. It doesn't work with beta35.8 or older because how AllowFeedback is changed to a much smarter interface in beta36. But you don't have to think about these if you use vpm ;)
.NET 4.7 is required. Make sure your Windows 7+ is updated properly or install it from https://www.microsoft.com/en-US/download/details.aspx?id=56116

Notui is available through Nuget for Visual Studio (Code) and VL.

The above thing is a girlpower patch demoing a simple application structure with Notuiv inside. This is the patch behind it: 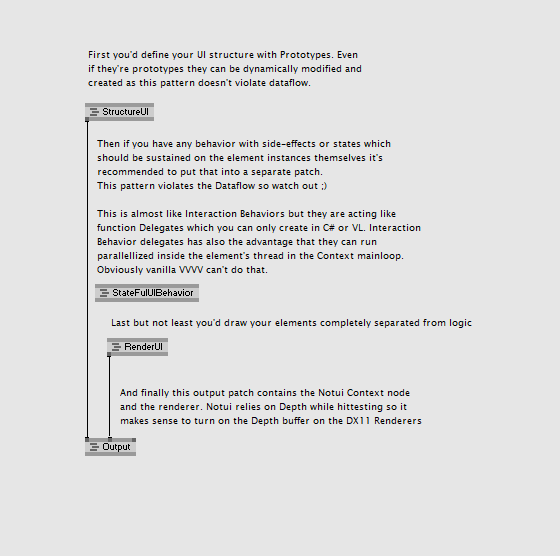 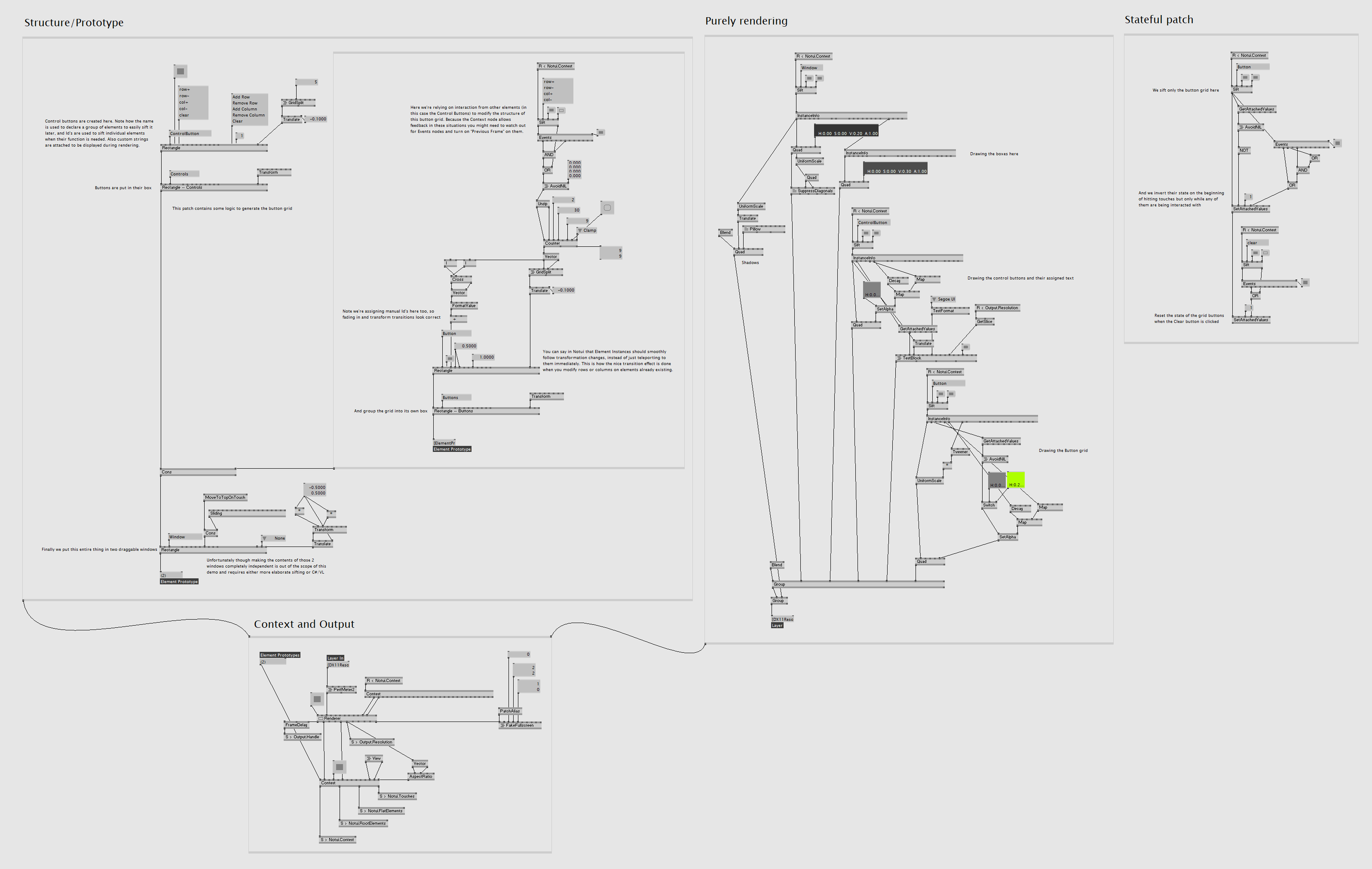 As you can see it's relatively simple to set up this 2 draggable windows with stateful content and animated declarative transitions patched 100% in VVVV with Notuiv.

The name comes from the fact that this library only handles structural definitions, behavioral patterns, and state-ful element management, but it's not providing ways of drawing those elements. This decision made it possible to use it in a graphics backend agnostic way and maintain complete user experience and artistic freedom.

Side note: Now for those who want to use Notui outside of VVVV don't get fooled or intimidated by the lines of code count of Notuiv implementation, that amount of boilerplate code is not a Notui specific phenomena . It's an inherent structural issue with how VVVV works. It's a general rule of thumb that if you want to implement a large library solving a big set of problems in a very modular way with lot's of information on their building blocks, VVVV's plugin interfaces requires thousands if not ten-thousands of lines boilerplate to deal with all the conditions a plugin can have. This is 100% solved in VL though.

Disclaimer on the logo: Notui have nothing to do with Israel's new shequel. That symbol just looks great and resembles an 'n' and a 'u' interlocked, throw in an 'i' and you'll get Notui \o/. But if anybody feels offended by this for any serious reason (like if an Israeli person really feel like their national currency symbol is being abused by random UI libraries for simply aesthetic reasons which has nothing to do with it, or with Israel) I'll immediately change it.

Thanks a lot and congrats ¡¡

great one Microdee!! thanks
side note : on windows 8.1 seems you need to install Microsoft .NET Framework 4.7.1 https://www.microsoft.com/en-US/download/details.aspx?id=56116
otherwise you get a System.ValueTuple´3´ error probably related to this AllowFeedback thing since tty ask for a framedelay!

@circuitb: nope I use ValueTuples so Notui requires .NET 4.7. I thought it's coming with windows updates for windows 7+. But good note, I'll add it to the requirements

I tried installing Notuiv as suggested via vpm but getting one red node though (which is Context (Notui) ). The exception dialog tells me:

I don't wanna spam the comments with stacks and loaded modules, so the full log is here:https://apostrophstoph.de/stuph/vvvv.exe-exception-2018-10-10.log

After a little bit of searchengining I might have an idea of what's going on, but really no idea of what to do about it.
I installed and deleted 50beta37_x64 plus the whole vpm-Notui-routine several times and let ccleaner fix the registry in between, but things didn't change :(

Same error here. Gave up after a while.

hmm I never encountered this exception, ccleaner and registry isn't likely to do anything good for this. Try deleting all *.dll.config files in md.core and in Notuiv and see if that helps.

Compilation error:
(7,15): error CS0246: The type or namespace name 'Newtonsoft' could not be found (are you missing a using directive or an assembly reference?)
(33,28): error CS0103: The name 'JObject' does not exist in the current context
Press any key to exit...

I've tried to install Notuiv (via vpm) on two other systems now: one is win7, the other is a fresh installation of win10 with all win updates. I get the same error on all three systems. So either there's something broke these days because of win-updates / .NET 4.7.1+ or I've missed something pretty basic, which seems to be the more plausible explanation, I must admit. But what?
Btw, I used 7zip.

whoa... this is beautiful
massive thanks!

@stophl: unfortunately I know as much as you do in this regard. it would be nice to look at your computer via a teamviewer session if possible to see what could cause this.

micodee You're vvvvery welcome to do so. I'm gonna send you an email in a minute. Thanks!

would love to try the new release but v4 won't start with any version above 0.23
tried with vvvv 36, 37 and 38 on two different w10 machines, one with clean install.

in case "vvvv won't start", "vvvv crashes without error message" check the Event Viewer of Windows and in "Windows Logs/Application" see all errors. If one of them mentioning vvvv even better if its source column says ".NET Runtime" see if it says anything about Notui(v). then I can help

2. it's bubbled up "Application Error":

Hope it helps you since the pack looks really promising, man!

what's after "Stapel"? according to google translate that seems to be the most important part of the message.

hmmm, just a hunch, can you go to vvvv/packs/Notuiv and delete the "factories" folder, see if it works

Hello,
same problems here with not VVVV not starting up anymore. Any leads on how to fix this? When I delete the factories folder VVVV indeed does start up. But Notui of course ain't working. Reported this on Github too, see there for details.

@systray27: answered to your issue, tl;dr: unzip vpm with 7zip.

@microdee: Thanks, I did get it running now. Curse to windows explorer unzipper!