vvvv » Blog
» vvvv in numbers 2015
This site relies heavily on Javascript. You should enable it if you want the full experience. Learn more.

SPOILER: this whole thing here... it seems to be getting somewhere..

helo again everyone, thanks for tuning in to this series of annual blogposts about quantivying vvvv. we're meeting here for this occasion for the fifth time in consecutive years which i think does qualify as an anniversary. so..horray. if at this point you have no idea what's going on or if you just want to remind yourself of what happened so far, you might want to click yourself back to: vvvv in numbers 2014.

you know how it goes, first what we know about you from our webservers logs. the following numbers show visitors to vvvv.org per country. so last year japan, this year china: out of the lower ranks onto spot 3, displacing russia. with germany and usa apparently close to peaking:

not that we think in those terms (at all) but... regarding "world domination" i'd like to point your attention to the following illustration: 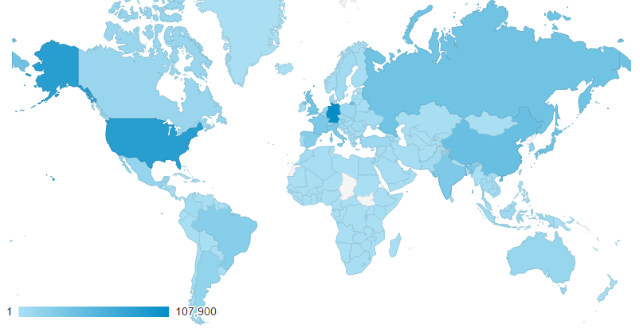 according to googleanalytics in 2015 you accessed vvvv.org from all countries in the world except 4. but even of those 4 countries vvvv.org was accessed in the past years. we count 3 sessions from north korea in the last 10 years (no license though).

again the number of unique users has increased quite steadily. and analytics even tells us that 43% of those were returning and 57% were new. good. good!

overall user-engagement on vvvv.org seems on a decline though. all curves (except the shouts) point down. sob. so here is how i'm gonna do it: put only the growing numbers in a shiny diagram to make it look good for the majority of you who only skim over the images and mention the sad truth no further.

is it because our like-button is not tracking you? you wanna see banner-ads in the forums? sponsored content in the documentation? bigger headlines? (shouting desperately) what is it?

(acting cleverly) or is it really on a decline? lets have a look at some other numbers i've always been neglecting so far:

in the end i'm afraid we'll again probably have to blame it on our improved documentation on Patching, Spreads and Graphics that just leaves less questions for beginners.

hm..anyone wanna explain this? more people visiting the website but less total downloads. so is it that they come here to see but then don't find the download button? or just the fact that we've had one release less? anyway it seems a least the ratio of people also getting the addonpack is still growing.

also if you do the math "average downloads per release" you'll see a more positive image..

what the flattr? ok, first the good news: it makes us money, real money! check this:

i do see a trend there, and i like it. very much, because.. you see that's people who want to support the development of vvvv even when they do not use it commercially. imagine that! just like so..

but flattr isn't only there to support us. it is also the simplest way to support your fellow patchers and contributors. in 2014 we had 17, at the moment of this writing we have 40 vvvv users using flattr. but who to flattr? glad you asked: just have a look at the amazing contributions that pop up all the time. if you like one of those -> flattr it. or in the forum, if someone takes the time to help you out, boom -> flattr. see?

so what are you still doing here? head over to the flattr-site and get an account, you don't want to be the last to join the party!

OR! and here is the other thing: the flattr-people are in the process of rebuilding everything and the whole service a bit shacky at the moment. e.g. last year i was able to show you a listing of flattrs received by vvvv users which is not possible right now. so let's give them some time. i'm following their work on it and will update you in a separate blogpost once the woes over there have calmed down.

remember when i was posing the businessman at our node15 keynode? talking about our income curve (around minute 32++)..i just watched that again and saw there was a little mistake in the slide (and also in what i said) regarding the times of the node festivals. here is a fix plus latest data:

so thanks everyone involved for making my prediction come true. oh you're so predictable! but you know..in a good way! and now how about this coming year you surprise us and do not follow that up/down pattern?!

and also this one, my favorite:

this table shows the number of different countries and companies that licenses were bought from. if you prefer to understand that fat number in percentages then let me tell you that this means a whopping +20% companies using vvvv commercially.

then again another view: licenses bought per country. sad to see last years shootingstar japan drop out of the ranks. but hey it is a tough business to compete in the top vvvv-using countries. counters have been reset, there is another chance for everyone this year..

so allinall, very well done everyone. thankyouthankyouthankyou. you're an amazing audience and the show is going on! how you ask? well, if i may remind you of that next big thing called VL we're working on. this is the way forward. this is what we're going to sell you in the coming months. where with selling i mean metaphorically, you know..we'll try to make you want to have it really bad. we're still not happy with some things so we're sorting those first before pushing it more. but once we're there the plan is to show you how you can slowly integrate VL into your patching-routine so that at some point you'll look back and will not even have noticed when you started working with probably the most modern visual programming language around (your mileage may vary).

so lets just take things slowly as we did the last ~15 years. because, as they say, apparently good things take a while..

and once again thanks everyone who contributes to vvvv all this would look very different without you.

Thanks for taking the time, joreg. I always liked this stats stuff.
Now folks, really spread the word about flattr(https://www.flattr.com). For a community like ours, this is the perfect appreciation solution.

Ah, and maybe some stats about vvvv.js would fit in nice. Since i had a quick'n'dirty use case recently i guess it might contribute some of the more desirable stats graphics in the future ;)

Regarding the "more views, less downloads" phenomenon, often when I mention to people that I use VVVV and it's awesome, their response is something like "Yeah, I've heard of that. I checked it out once, but I use a mac. Maybe I'll install bootcamp.."

These reports have been really useful, bridging the gaps between members and vvvv, thanks...

very interesting as usual, thanks!

okay i need to post more in the forum to make your graph better next year ...

Hello all, Im from new delhi ;).
Your community is awesome.
Ive been trying to learn vvvv for a while now. Mainly work with unity but hope to get the enthusiasm to switch someday.

Hope my comments are not too irrelevant for this post.

I think lower engagement numbers are probably the result of a growing GitHub issues popularity and Facebook activity as well.

I am really happy that things are going well for you guys!

Best thing is to have new young people that can grow with vvvv and get to point when it makes their living and they can afford the license, as it happened for me (I began with vvvv in high school and done lots of stuff in college with it). Workshops are imho best place for spreading of vvvv, because its world of difference if someone can guide you through beginning so I hope there will be lots of that in 2016 around the world. This leads me to the point, it would be great to have statistics about workshops that had VVVV lectures and if there is some correlation between number of workshops and usage of vvvv and licences.

USA should split some percentage to China because of the GFW(GreaFireWall) in China.
:D