vvvv » Blog
» FOLLY - Media Architecture Biennale 2014
This site relies heavily on Javascript. You should enable it if you want the full experience. Learn more.

A Project by OPEN CONSTRUCTS

This project proposes a new way to look at the interweaving of the natural world and urban life through the use of new media and architecture. Rather than trying to manage the relationship between the natural and built environment with computation (and its metaphors) this project sets out to augment the natural world. Thus creating artificial environments that evokes the organic. An architecture that artificially amplifies the experiences of nature that is diminishing in the urban context. 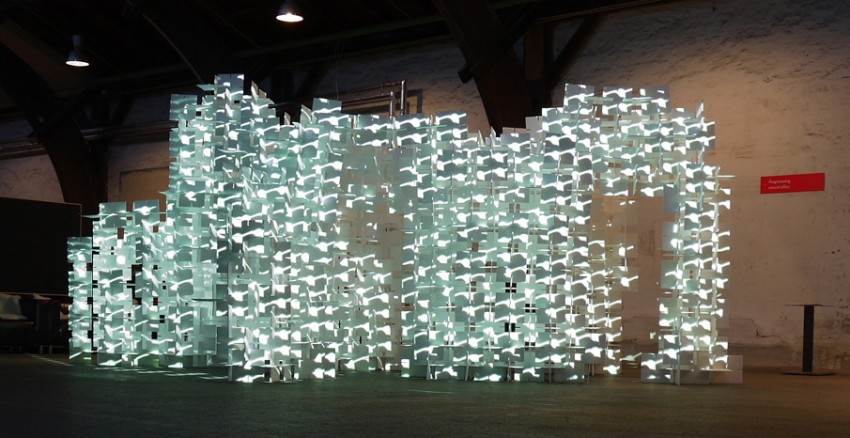 During the 20th century the study of cybernetics offered an explanation for ecosystems in nature to achieve stability. Resulting from this was a popular view of nature that it is constructed on the premise of homeostasis: that is, it is proposed as a closed system with various feedback loops which, despite changing external conditions, is able to sustain a stable inner economy of energy production and consumption. This is apparent when examining the theories of Jay Forester, a cybernetics professor at MIT and creator of the early warning system during the cold war, who believed that the whole world was just a network of systems with feedback loops. Ecology as machine, machine as ecology — everything can be explained and controlled as a system begins to sink in the public’s imagination, despite various failed test results by other prominent ecologists.

This was done by reproducing the affect of nature in a new abstract manner via VVVV programming and projecting this onto a public pavilion. Here the affect produced and its experiential qualities is the goal of the project. Resulting in a new type of public pavilion/infrastructure for cities.

The Pavilion was the result of a workshop at the Media Architecture Biennale 2014 in Aarhus Denmark. Participants put together the blocks to shape the pavilion as they wanted. Pathways throughout the pavilion were created to offer a variety of ways to circulate and experience the spatial qualities of the pavilion and its projections. Participants also programmed their own affects that were projected onto the pavilion.

Alright! I (not pictured) couldn't make it back to Aarhus so didn't get to see the results after all but that turned out nicely!