This augmented reality mirror, based on point of view, superposes a virtual layer on reality. It tries to explore alternative medium for augmented/mixed reality. However, the same setup was already made by Microsoft Research in 2012 https://www.microsoft.com/en-us/research/video/holoflector/ .
Made possible thanks to the material lend by Stereolux, Nantes and the help of Charles Loisy (Stereolux multimedia manager).

A cloth that gives haptic feedback. It translates touch into sound and vision.
Made with vvvv and a Kinect 2 sensor.
The installation „Responsive Fabric“ turns an seemingly ordinary cloth into a tangible interface. An interaction with the surface of the fabric creates a multi-sensory experience that expands perception through a virtual layer. Touching the cloth generates acoustic and visual stimuli. By altering the physical form through pressing and stretching the fabric, the object also transforms visually and produces sounds. With the translation of haptics into sound and image, the object becomes an audiovisual instrument and an interface between reality and virtuality.Done at the Muthesius University for fine Arts and Design Kiel.

Currently shown at the Visible Sound Exhibition at Kunstkraftwerk Leipzig. 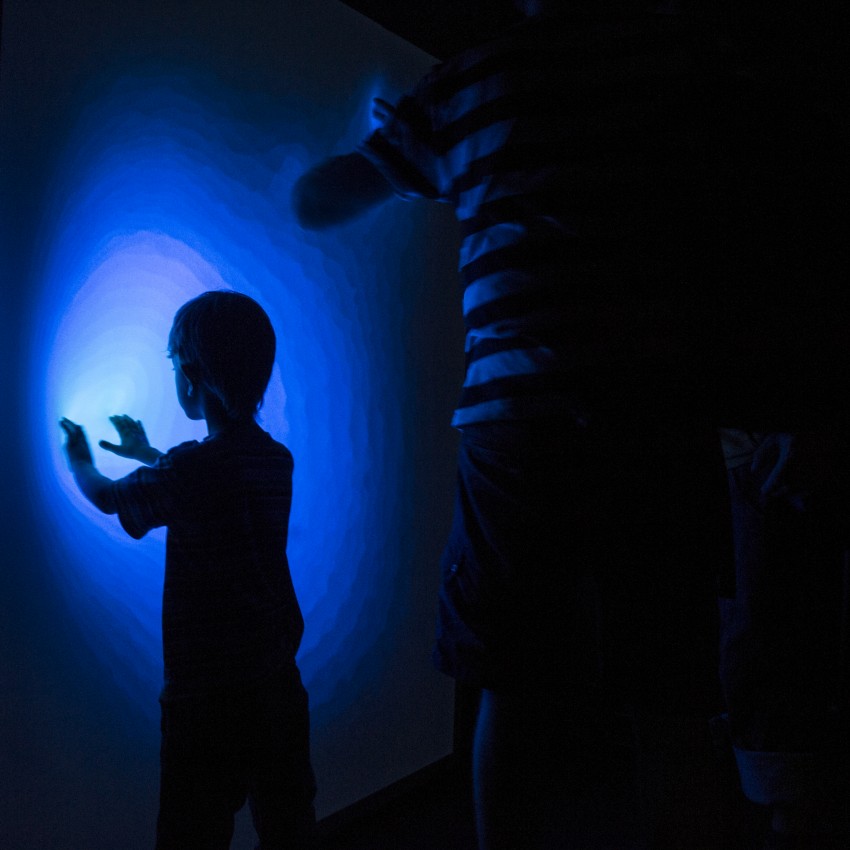 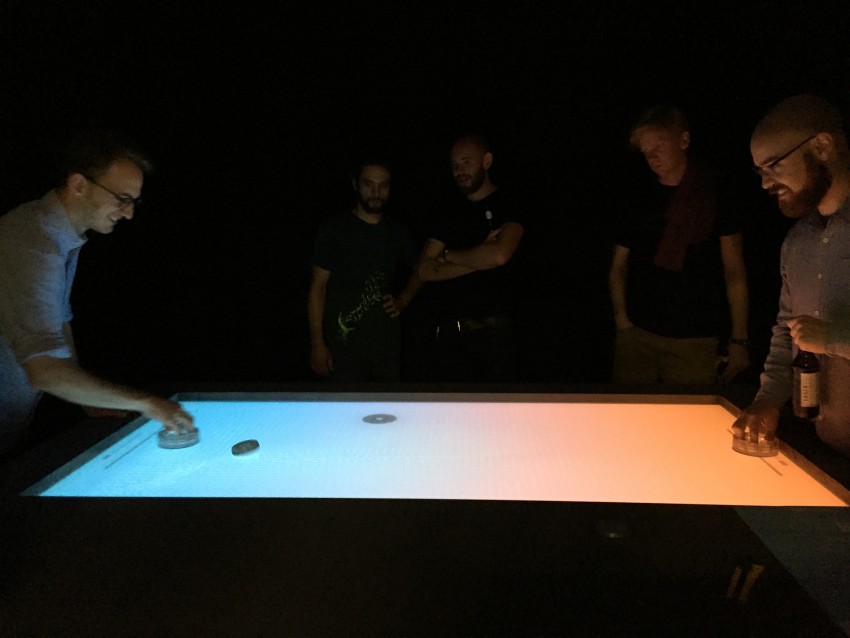 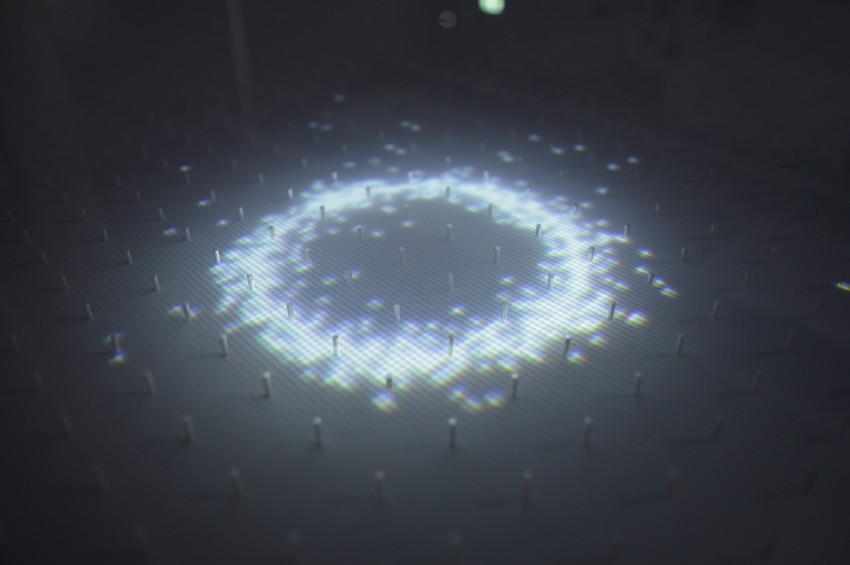 Aircade is the result of three month group project at the Muthesius University of Fine Arts and Design. It was developed by Moritz Aznan and Nils Nahrwold and supervised by prof. Frank Jacob as part of the Interface Design Masters program.
The idea was to upgrade the classic airhockey-table with digital technologies to change the game entirely. The focus besides developing the necessary soft- and hardware, lay on designing games that require dexterity, cleverness and precision, so the users can make up their own new tactics.

special thanks to chris (u7angel) and Jens (jens.a.e) for support! 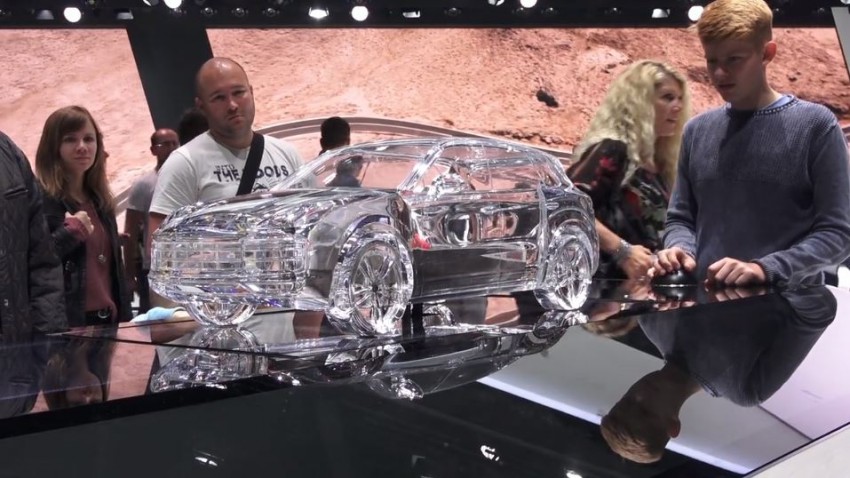 Porsche Under Control is a kinetic, interactive exhibit. While the car encounters rough terrain, your goal is to keep the balance. While this is a hard task, the cars algorithms are the ones to beat.

The exhibit concept is done by Copyright Communication (awesome, Mert)
Engineering and construction by Expotec Mainz
Software and production by wirmachenbunt

Thanks to Heinrich for the algorithm support ! 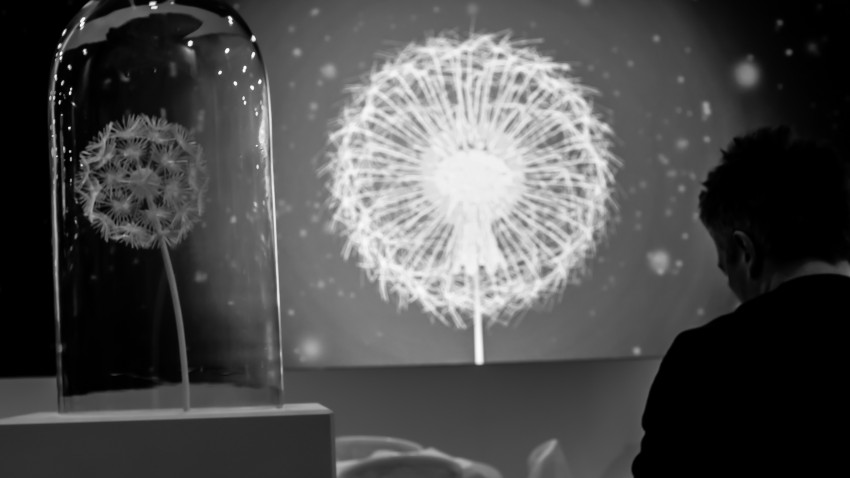 Schwarzwald is a light installation that was made as a part of the ПУСТ* project. The project reflects on events that took place on December 7–8, 1991, during which time the presidents of Russia, Ukraine and Belarus signed the Belavezha Accords, officially dissolving the Soviet Union.

The installation emphasizes the contrast between darkness and brightness, referring to the names of the last two primeval lowland forests in Europe – Schwarzwald (schwarz means black in German) and Belavezhskaya Puscha (Belavezha means white tower in Belarusian). It was inspired by the light that, typically shimmers in the forest: Its glare takes on bizarre forms due to the rays that make their way through the leaves and branches, creating the sense of moving shadows and phantoms of forest creatures.

The Trained Particles Circus is a research on aesthetic drifts and links between different realities coming from the image, sound and movement of a software entity whose existence occurs in an improbable circus territory. From its objectivity and its audiovisual narrative, it aims to be the catalyst for a reflection that poetically intertwines facts, speculations and materials from the scientific vanguard of the early twentieth century with discourses of artistic creation of the image and synthetic sounds, the creation of interfaces, the spectacle, the artificial life and the experimental video. 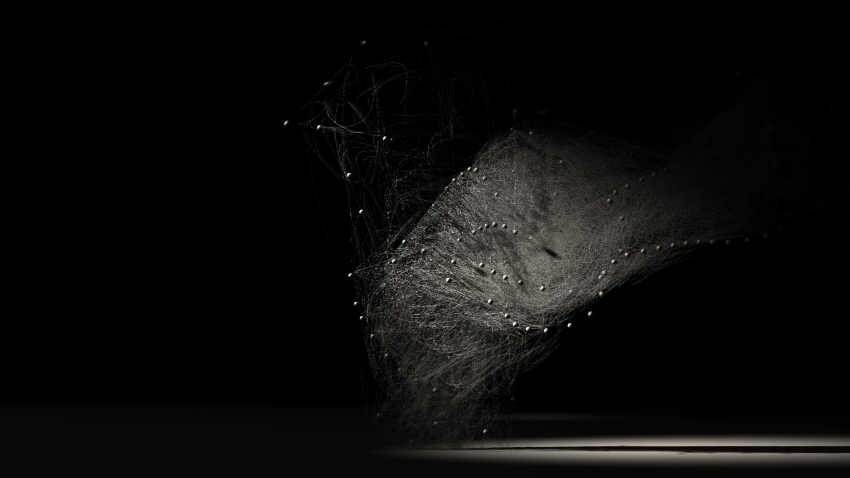 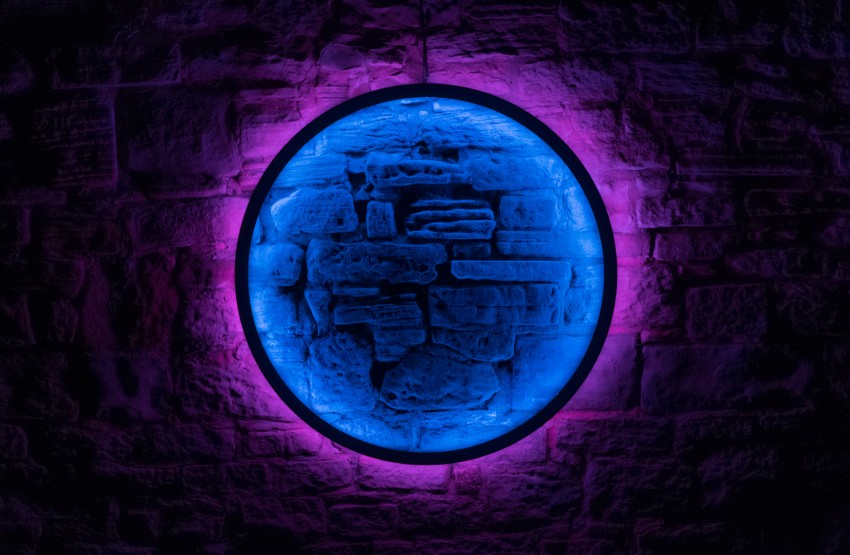 Harmonic Portal is a new work commissioned for Lumiere Festival Durham, 2017 http://www.lumiere-festival.com/durham-2017/
There are 5 pieces arranged around the walls of St Godrics Church, Castle Chare, Durham, each is a portal into the surface of the wall, the light amplifies surface details due to the angle of incidence and feels like a magnifying glass (or even an electron microscope at times.).
They question how we perceive colour, the inside and outside contrast and harmonise as time progresses, while this is mirrored by the sound track which reflects the colours, the frequencies of red, green and blue light have been dropped by 42 octaves and vary in proportion to those colours of light.
It is partially contemplating how our brains create colour from 3 frequencies, but also how limited a bandwidth that actually is, the fundamental notes are a flattened Ab, A and B.
http://www.colour-burst.com/2017/11/harmonic-portal-lumiere-festival-durham-uk/

Interactive Light Space designed for the ZKW Group at IAA 2017 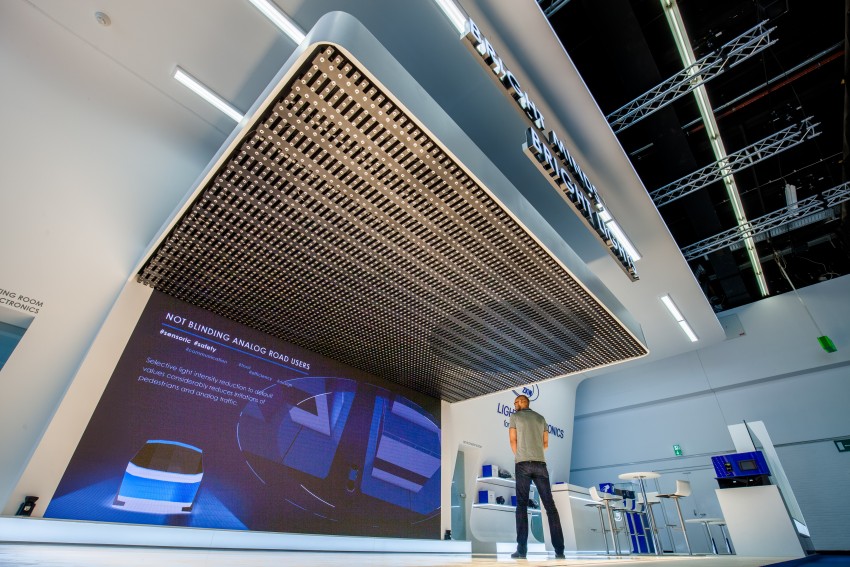